After talking with some friends about recording Overwatch locally for uploading to your favorite sharing service, I decided to write up my settings to help people get some high quality recordings created. I also wanted to touch on the keybinds and the replay/clip system built into OBS and how you can use that as well.

Note: All of these settings are for recording locally. If you stream with OBS please save all your settings or maybe run two installs as some people. I’ve gotten used to switching the settings between my two setups so it doesn’t take long, but do what works for you.
END_OF_DOCUMENT_TOKEN_TO_BE_REPLACED

Sharing one of my better Lucio performances in Overwatch. I’ll be uploading more Overwatch videos and putting together some more guides and commentary on the game moving forward. Stay tuned for more updates!

There have been some people that have asked how I have all my video inputs setup for streaming. I recently updated my setup so I thought I’d make a post explaining everything. Let’s get right down to it, here is a diagram of my current setup. Look it over and we will start to go over it in more detail. 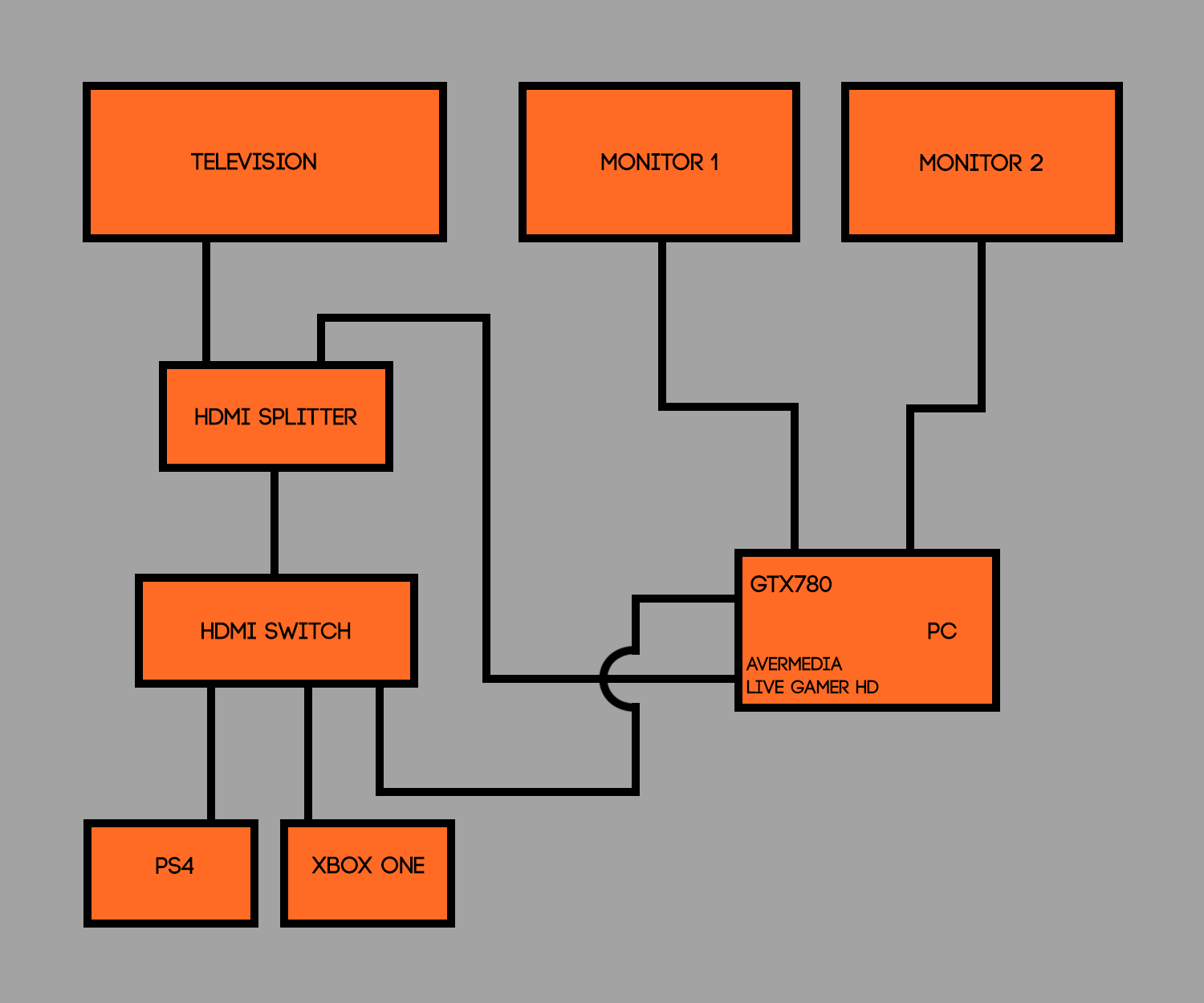 [Link to full version of image.]

The goal of this setup is to be able to stream/record any console activity, as well as to be able view it on the television all without needing to swap any cables. I also want the ability to use the television as a third monitor for my PC if needed as well.

I recently purchased a HDMI switch. This one was nice because it comes with a remote that easily lets us switch between any of the inputs. We start by plugging both consoles and the video card into the HDMI Switch.

The output of the switch will run to the HDMI Splitter. I have the 1×2 version. Something about this particular splitter that we will need to make a note about. This one will strip HDCP from all inputs. This is important because we want to be able to record video! Some splitters will not strip this out and will act as a passthru, you want to avoid these if your goal is to be able to record the video from the consoles. The next step in the setup is running a cable from the splitter to the television and then into the video capture card in the PC.

This setup works out great. I can fire up either console and use the remote to change the TV to the right input. The streaming software will pickup the consoles or third pc monitor as expected too. Really nice having this all setup finally and not needing to swap cables. Previously I would have to change out the console cable straight into the splitter, and swap cables to get the third monitor option working.

Things not noted in the diagram are the cable box that also runs to the television as well as my camera for streaming, which is just a 1080 Logitech USB webcam.

As always, any comments or questions about the article, feel free to reach out to @Nicarras on Twitter!

Few weeks late on posting this but here’s the video!

This work is licensed under a Creative Commons Attribution-NonCommercial-ShareAlike 4.0 International License.